If you sit long enough with an artist.... 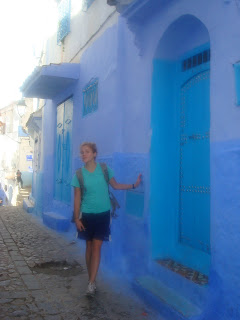 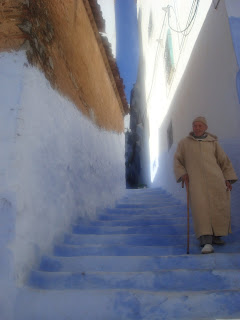 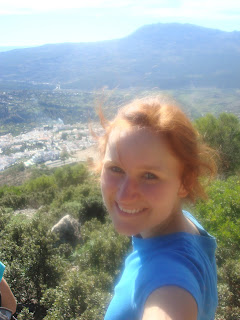 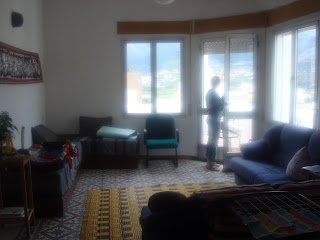 Caitlyn and I took advantage of the break between our Darija final exam and our first FusHa courses to travel to Tetouan, in the north just about an hour from Tangiers. Cait, who will be researching Spanish-Moroccan relations during the Spanish civil war, is thinking of living in this city which used to be the capitol of the Spanish protectorate. She went to check out the city to see if she could live there, and also to check out the archival resources and finally (but most importantly) so that we could visit our fellow Fulbrighter, Eric Saline, who teaches at the art school in Tetouan.

After a 6-hour bus ride, Eric and his beautiful wife Maria and 3-month-old son Alexander met us at the CTM station in Tetouan’s Ville Nouvel. Eric has a Fulbright teaching fellowship and classes just stared this week. Also, Maria and Al just arrived on Sunday, so it was extra gracious of them to host us for 3 days. Right away they fed us chicken stir fry and chocolate and wine and great conversation. Man, I haven’t eaten so well in a long time: pumpkin soup and fresh (sugar-free!) yogurt and avocado/tomato/gouda sammies. Cait and I made dinner for our hosts as a thank-you: Mexican stuffed tomatoes and dates stuffed with walnuts and blue cheese and the famous “Fessi Fruit Salad” and red wine from Meknes.

Eric is an artist specializing in paper creations and printing. (Check out his website at: www.ericsaline.com – he is amazing. I highly recommend investing in one of his pieces before they become unaffordable  ) Their apartment is gorgeous, with balcony views of the Rif mountains and the old medina. It is minimalist in true Scandinavian style, but full of art and baby toys, with an air of creativity permeating each room. We spent the week walking around getting to know the city. Eric took us to some art galleries and schools and even to a lecture by Jan Elliot, an American cartoonist who was in town for a conference of female cartoonists. It was refreshing to live around Eric and Maria’s creative energies.

Eric said that his favorite students are those who look at one of his pieces and say, “I don’t get it.” They are the most unpretentious and open to instruction and able to find their own style. Maria is just like that. She says she appreciates beautiful things, but doesn’t try to “fit into” the art world by bothering with pieces that don’t interest her. Spoken like a true Biochemistry Ph.D. She is just so genuine and kind…and a true Swedish beauty. Let’s be friends.

As we sat and drank our post-lunch coffee in the square, it hit me how refreshed I felt…mostly due to our delightful hosts, the mountain air and thunderstorms, and some accidental laxative tea. Tetouan is known for its social conservatism, but is quite unthreatening. One thing that Cait and I noted right away was the striking absence of tourists and annoying comments from men and lack of pursuit by shopkeepers- something we have already grown used to. The medina is so chill and accessible- easy to get to know vendors. About 8 km from the Mediterranean coast, the mountainous landscape is profoundly beautiful, especially in the red-gold of the sunset. The architecture is Spanish, with big public squares and elaborate balconies that you wouldn’t see in Fes. Also, Tetouan is only about 35 minutes from Ceuta, which is actually a Spanish town on the African continent…so it is easy to travel across the border and from there traverse the Straight of Gibraltar into Europe. Handy. I would like to spend more time in this city, if only I spoke more Spanish, or had a reason to take the long trek.

After our early-morning goodbyes to The Family Saline, C & I took a 2 hour bus ride to Chefchauen, a city high in the Rif Mountains, known for all the blue painting. Indeed, from far away, the entire city looks periwinkle, because most of the houses must be colored a certain shade. We checked into Pension Castellano (decent shared bed with a great mountain view. Very blue, inside and out. 50dh each) We changed clothes, bought some veggies & tuna & fresh ricotta-esque cheese called jibly…then set out for Kalaa Mountain. We intended to hike to the top, stop for lunch, then hike back in the day.

We followed the 4WD trail until it split, then continued forward, walking almost halfway behind the Mt. We asked a boy if we were on the correct route, and he showed us the way back- for a small fee. We ended up backtracking to a small, almost indistinct trail, then headed up and around for nearly an hour and a half. We met only goatherds who asked if we wanted kif, and sturdy mountain women carrying entire olive trees on their backs (while the men carried these trees on donkeys, might I add). When we hit the trail in a pine forest, we decided to go off-trail, straight up to the top. Bad idea.

I don’t know why, but I hate being lost. I hate getting off trails. I guess I don’t trust the ground ahead of me if I can’t see it. Hmm… We cut through brush for a while, then sat a cliff overlooking the sheer drop and ate our lunch. I was definitely discouraged at the prospect of having to backtrack down to the forest, but we did. C tried to keep me chipper, but I was intent on finding our way back. With the help of a guardian angel goatherd, we found the trail, which eventually connected to the steep 4WD track. 4 hours later, we were back where we started. And of course, at the bottom of the mountain, we found a posted map.

Back in the Blue City, Cait and I headed straight for the hammam. I’ll describe them more eventually because they deserve their own treatise, but Hammams are public baths for either men or women where alternating steaming and freezing water is dumped on you, then your skin scrubbed until layers of dead skin are sloughed off and you are slicked down with brown tar-like soap. Upon leaving, your skin glows pink and you’ve never felt more refreshed. Promise. It was just what we needed after that dirty hike.

We chilled out, then found a delicious last-night-of-vacation dinner of tomato salad, chicken tajine, fresh melon, mint tea and flan for dessert and- what we do best- conversation.

Chefchauen is beautiful, but must too touristy for my taste. I’d like to go back to attempt some more hikes and to eat their incredible version of the Fessi Fruit Salad- which includes flan at the bottom!

4 hours via crazybus and I am so happy to be back in my dear little apartment. It was so silly, but Caitlyn and I were so delighted to see Hassan, the sweet little man who owns the corner store below our apartment. He asked us where we had been, because we hadn’t been in to buy yogurt for the past few days. We begin Modern Standard Arabic class tomorrow, which I have basically completely forgotten since taking it in college. I feel refreshed now, though. I just need a good nights’ sleep….
Publié par Catherine Skroch à l'adresse 8:00 AM