After wrapping up my birthday bash and my final Arabic exam, I hopped on a plane bound for Dubai, bound for Kuala Lumpur, bound for Penang, bound for the marriage of my favorite big brother Steven to my favorite sister-in-law Shi-Hsia. 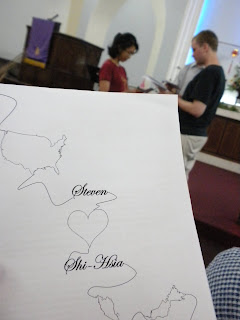 I arrived in Penang, Shi-Hsia’s beautiful hometown on an island off the coast of Malaysia, in the middle of the night. After a minor incident involving a curb, a popped tire, rain, and a flock of helpful Malaysians, I was reunited with my family. The next few days were a blur as wedding preparations were made and I was introduced to approximately 2500 new relatives, of which I retained only 3 or 4 names. Sorry.

We rehearsed the ceremony in the Methodist church where SH’s father has been the pastor for many years. Everybody had a role. My brother-in-law directed the ceremony and my sister read some verses from the Bible. My dad, once he was done clowning around, gave a message that was brilliantly appropriate for Steve and SH’s scientific natures. SH’s uncle pronounced them man and wife and her sister and brother played music. I was even recruited to sing at the last minute (my condolences to the 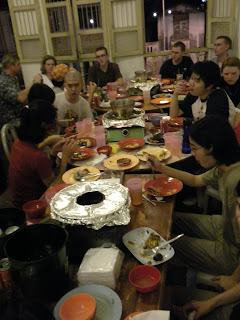 After the rehearsal, we headed over to a steamboat restauraunt. This is a place where you choose your own raw fish and veggies and cook them at your own table in a big pot of boiling broth. Not gonna lie, I had a vision of the wedding guests saying, “Well, it was a lovely wedding, but the entire wedding party had food poisoning.”

The morning of the wedding we awoke chipper and salmonella-free, alhamdoulilah. I will always remember my nervous older brother saying his vows over and over and me just patting him on his head. We ladies headed over to SH’s early to help the bride get ready. I have never seen a more chill bride on the morning of her wedding. When Steve and his groomsmen arrived, they were made to do feats of 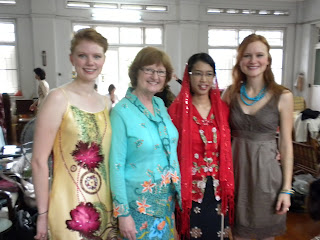 chivalry, to prove his love. He had to eat Durian fruit candy (which smells like a cross between unwashed socks and death), do pushups, and sing a love song in Chinese- which he performed brilliantly, I might add, to the surprise and amusement of her Chinese relatives.

We assembled in the Church, and as the Star Wars theme song played, SH’s sisters and best friend walked down the aisle, in traditional Indian, Malay, and Chinese dress. The bride wore a traditional outfit: a long-sleeved gauzy shirt with a pattered skirt and silky red scarf in her hair. She was stunning. 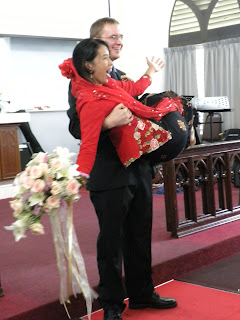 The whole wedding was a beautiful mix of American and Asian tradition, with the message being translated into Chinese. It was over quickly, and then it was time for photos. Our modest little white family was a stark contrast to SH’s relatives from Malaysia, Singapore, and China. When Steve was standing in his new family’s group photo, I couldn’t help humming “One of these things is not like the other…” Then it was off to the Royal Hotel for the grandest wedding reception I have ever attended.

I can’t list all the details, but the wedding luncheon included, but was not 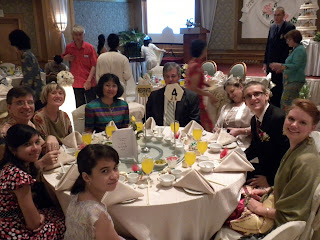 limited to:
-an 8-course meal, brought out course-by-course by an army of waiters who marched the food in with some very dramatic drum music
-Two (2) swan ice sculptures
-Karaoke. No lies. Guests got up and sang at whim. I was even convinced by SH’s younger brother to improvise a verse to “Stand by Me”, telling a story about Steve’s childhood.
-Giant balls of glowing flowers
-a 5-layer wedding cake. (Real or not real? The Jury’s still out…) 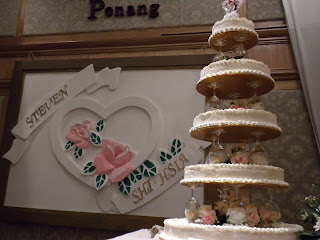 -speeches and toasts by juuuust about everyone in the room. Wait…yup. Everyone. And, of course, my sister cried. Sucka.
-Seaweed and sea creatures (to eat) that I have never seen before.
-A break dancing demonstration by SH’s brother. Not gonna lie, it was pretty rad.
-Did I mention the ice sculptures? There were two.

After the lunch, there was a tradional Chinese tea ceremony, in which the bride and groom ceremonially serve tea to their closest blood relatives and the relatives give them their wedding gifts (always money) in little red envelopes. I was so nervous that Steve was gonna spill hot tea all over sweet old grandpa Ah Kong, but they managed alright. Then as the youngest unmarried child in my family, it was up to me to serve tea to the newlyweds and they gave me a red packet. Score one for me for not being married! I saw THEM coming. The ceremony followed traditional guidelines of serving the eldest males first, then more distant relatives. It was a moving (albeit complicated) method of honoring family, which is very important in Asian cultures.

The rest of the week flew by as I spent time with my parents and siblings, and my sister’s in-laws (shoutout!), and my new Malaysian relatives. I walked around the island, which continues to maintain precious balances between modernity and tradition, colonial legacy and nationalism, and Malay, Chinese, and Indian cultures. East meets West between the high rises and plantation mansions, and among the mosques, churches, and temples on the same city block. I would love to explore the country more, to hike in the mountains and to learn how all the diversity coexists.

Thanks to friends, we were treated to a fabulous meal at the Penang Swimming Club (which is accessable by exclusive membership only), where we also swam in the ocean and I saw my first Indian Santa Claus singing Christmas karaoke. (Do you see a running karaoke theme?). On our last afternoon before departure, we had the most opulent brunch at the Eastern & Oriental, a swanky colonial-era hotel and restauraunt that once welcomed Rudyard Kipling and Edith Piaf. The buffet of seafoods and sushi and meats (ostrich, anyone?) and salads and desserts and fruits and a chocolate fountain and waffle bar and espresso machines and ice creams and fresh lemonade was overwhelming. And just when I was convinced that my entire family had forgotten about my birthday, out comes a lovely piece of tiramisu with a candle on it. I was moved to tears, mostly just cause I was feelin’ the love at that moment.

The whole Malaysia Affair was just that: pure love. What a blessing it was to be able to see my family over this reflective season, even if it was 6000 miles away from where we normally celebrate. I was, and still am, just ecstatic for my brother and sister-in-law. I love their love and I am so impressed that they have chosen the road less traveled, the road that will not be easy or convenient, because they believe that the Love they have will get them through all unceritain times. Brilliant.
As his little sister (and big fan), my role with Steve has always been to pat his head and telling him how proud I am of him, no matter what. We have been there for each other through the years, especially in college, when he literally made sure I had food to eat and that I was safe (and wasn’t dating any scumbags). He fulfilled his role as an older brother wo 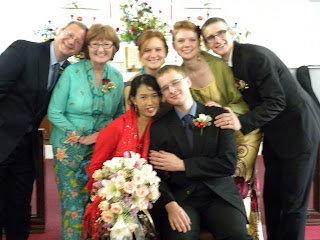 nderfully.
All that said, it was not difficult to see him marry and move to Singapore, where they will be residing from now on. Our family is used to distance, and even though I can’t see him so much, I know that he has a loving woman to pat his head and tell him how proud she is of him. For that I am grateful.

And when I was still sighing over all the romance (and still marveling over those ice sculptures), I found myself in Swankytown, aka: The United Arab Emirates.
Publié par Catherine Skroch à l'adresse 12:18 PM