What the Heck and I DOING Here?

This is the moment you’ve all been waiting for: an explanation of the research that has me in Morocco for 1.5 years. And you thought I’d NEVER get to this! Disclaimer, though: once I start talking about the topics of human rights and transitional justice in Morocco, it’s hard for me to stop.
Contemporary Moroccan History 101
After Morocco’s independence in 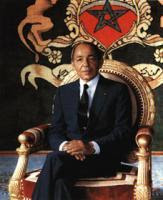 1956, a constitutional monarchy was established, but King Hassan II’s subsequent rule (1961-1999) was characterized by the repression of human rights. Tactics including arbitrary detention, forced disappearances, torture, inhumane treatment, and the repression of fundamental liberties were used against those who dared to oppose the regime. It was not until the end of the Cold War that the monarch began to change his policy and slowly soften his dealings with political opponents.
After Hassan’s death in 1999, his son and successor, King Mohammed VI, prioritized the amelioration of human rights by focusing on liberalizing measures including by ordering an Equity and Reconciliation Commission to investigate what has been called “The Years of Lead”. On his January 7, 2004 Throne Day Speech, King Mohammed VI ordered the Instance d’Equite et Reconciliation (IER or المصالحة و الإنصاف هيئة) to “uphold human rights as a culture and as an attitude” . I am in Morocco because of the IER. 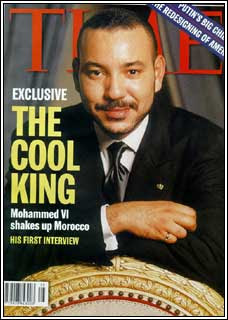 The reign current King Mohammed VI is characterised by a liberalisation which stands in stark contrast to that of his late father, Hassan II. One young Moroccan man on the train summed up popular sentiment to me: "We see the King as our cool older brother, not like his grumpy old father."


The IER was mandated to assess, investigate, arbitrate and make recommendations concerning the gross human rights violations that occurred between 1956 and 1999. Sixteen commissioners were appointed, along with a staff that conducted field investigations, collected testimonies, held nationally-televised hearings, visited former detention sites, and gathered and analyzed records of disappearances across the nation, from April 12, 2004 to November 30, 2005. In total, the Commission received 20,046 petitions for individual reparations. After determining the cases within its jurisdiction, 16,861 files were examined. Finally, after investigation and deliberation on each individual dossier, it was determined that 6385 were eligible to receive financial compensation, 1499 were eligible for alternative reparations, and 1895 qualified for a combination of the two. The remaining 7082 files were dismissed, rejected, incomplete, or classified.
The IER’s Final Report suggested recommendations and reparations to be managed by Morocco’s Advisory Council for Human Rights (CCDH). Recommendations encompass four main areas: 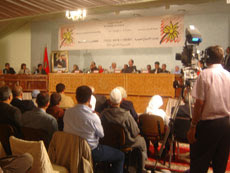 Pragmatic steps were taken in the areas of financial compensation, medical and psychological rehabilitation, and social reinsertion, as well as with diverse development projects that span from women’s literacy programs to communal agriculture initiatives to citizenship 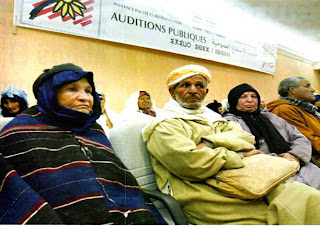 and democracy education.
As of January 2010, The CCDH declared that individual recommendations had been completed on all but 66 files. Work is underway on communal reparations programs in 11 regions across the country. In contrast, governmental reform has been slow, and debates on how to establish truth of past violations continue.

Victims and their families had the opportunity to testify at public auditions held across the country. Photos: www.ier.ma

My Questions
2010 will signal the 5-year anniversary of the closing of the IER. Though the Commission’s work is astounding in terms of speed and efficiency relative to other truth commissions around the world (there have been about 20 commissions since post-apartheid South Africa set the precedence in 1995), there is still much work to be done. Many international and domestic human rights organizations both within and outside of Morocco are overseeing the follow-up of reparations programs and reforms, but it is not my aim to critique the government’s performance as such. Instead, I seek to find out how equity, reconciliation, and justice occur in Morocco, with all its cultural nuances, roadblocks, and triumphs. I want to find out what means to promote democracy within an Arab-Islamic monarchy. Is Morocco truly heading towards “democratic transition”? Beyond this, I desire to discover what it means for Moroccan communities to be healed.
I am investigating fields including civil law, Shar’ia jurisprudence, Berber customs, State-society relations within monarchy, gender and power dynamics, history and memory archives, education, prison literature and self-expression. The ultimate goal is to understand the structure and functioning of the IER within Morocco’s political and cultural context, in order to gain clarity on how it may be used as a model for other Arab/Muslim nations in their own periods of transitional justice.
My hypothesis at this juncture asserts that the IER has not fit into a “one size fits all” model of transitional justice, which has grown in popularity since the success of South Africa’s example. Instead it has been heavily influenced by specific elements of Moroccan culture, particularly by women’s movements, Islam, the constitutional monarchy, and pressure from human rights organizations. In response, Moroccan culture has been molded by democratization and liberalization ushered in via this instrument of transitional justice.

My Methods
I have broken down my research into themes, which I am researching individually in order to gain a broad understanding of the context and functioning of the IER. First, I seek to better understand the background of the Years of Lead through historical research. Next, I am learning about truth commissions from ICTJ resources. I am particularly interested in the specificities of the Moroccan model- its structure and functioning and quantitative results. Furthermore, my work includes research into Moroccan politics, which encompasses international humanitarian law, French jurisprudence, Shari’a, Berber customary law, and civil law. Within each political sphere, I am researching the concepts of justice, equity, reconciliation, and memory. Finally, I am following up each of the four areas of reparations programs to see the unique and creative ways that Morocco deals with the establishment of truth, individual reparations, community reparation, and legislative and institutional reforms.
The next phase of my research focuses on analysis of the IER’s unique aspects, which differentiate it from other truth commissions, such as its community and gendered reparations approaches. This will illuminate how this particular Commission interfaces with the culture surrounding it, including the ways it is constrained by the political system, or bolstered by emerging human rights movements. In addition, it is important to analyze Islam’s role in Morocco’s human rights movement, despite (or because of) the IER’s secular nature.
In order to gain an understanding of the IER from within I have been interviewing scholars and professors, representatives of human rights organizations (both official and non-governmental, national and international), IER commissioners, and victims. I had the unique opportunity to visit some former secret detention centers and communal reparations programs including the infamous Agdz and Kalaat M’Gouna prisons (which I will blog about soon!).

My Answers (up to this point)
Responses to my research questions have been educative, eye-opening, frustrating, and even sometimes quite shocking. My time is simply too short to be able to do in-depth study on each topic, so my research is pointedly focused on the interface of Moroccan politics, culture, and the follow-up of the IER. I have identified four main areas that make the IER unique:
Personal testimonies from archival research and literature reviews, as well as individual interviews I have conducted have demonstrated just how oppressive the “Ye

ars of Lead” really were. Secret prisons were constructed in remote parts of the country, housing political prisoners for years, and in some cases, decades (For a dramatic description of this, read Stolen Lives by Malika Oufkir, or the graphic novel They Starve Rats, Don’t They? [On Affame Bien des Rats! in French] by Abdelaziz Mouride). Unspeakable acts of torture and brutality were used to silence political opposition. Entire regions of the country (particularly in the South) were left abandoned for decades, without any infrastructure development. Most alarming, many Moroccans lost faith in or grew to fear their own government, leading to a serious decline in civic involvement.
Abdelaziz Mouride recorded his experiences as a
prisoner in Casablanca's infamous Derb Moulay Cherif
prison in his graphic novel On Affame Bien des Rats!
Thankfully, however, political leaders have publically recognized these facts, and the IER is just one of the ways that the regime is attempting to reconcile Citizen with State. I have found that there is a culture of human rights built around Equity and Reconciliation in Morocco, as evidenced by the proliferation of prison literature and art, as well as the proliferation of diverse human rights NGOs within the nation. The Ministry of Education is also working to incorporate the history of the "Years of Lead" and human rights into national history books and university curricula. Just like former World War II concentration camps, Morocco is wrestling with current debates on how to deal with testimonial archives and former detention centers by transforming them into spaces of positive memory.

On the other hand…
However, despite the accolades for the IER’s Reparations programs, public criticism continues to be strong. Criticisms include the delay in reparation efforts, ongoing governmental censure of the press, and the lack of appeal mechanisms for victims to challenge decisions in their cases. Despite recommendations from the ICTJ and IER itself, there has been a lack of institutional and legal reforms- including within the prison and judicial systems- which would safeguard against repetition of wrongs. In addition, the issue of human rights abuse targeting Sahrawis has not been addressed and continues to be taboo. Most striking is the ongoing impunity for perpetrators of abuse, as victims were not permitted to name their abusers in their official testimonies. The Moroccan commission has emphasized equity and reconciliation instead of truth, to the detriment of the victims. If no one is tried, can true justice be rendered?

Notwithstanding these critiques, I have learned about the triumph of the human spirit in the face of injustice. There is nothing more impressive than the compassion and optimism that exudes from individuals who have been victims of the most heinous abuse. It has been humbling to work with these people and to learn from their life experiences.
I believe in the importance of this research because, as Amnesty International declared in its January 2010 report, the IER’s work is unprecedented in the Arab world in acknowledging responsibility for grave human rights violations and in seeking to provide redress for many victims. Though far from perfect, the IER is a model that can be used to address oppression and democratization, and to potentially bring reconciliation between State and citizen. I look forward to exploring my hypotheses with greater depth, to discover other uniquely Moroccan elements of transitional justice.

…so there you have it. The official explanation of my life and work for the next year.
I am living the dream.
Publié par Catherine Skroch à l'adresse 4:04 PM

Livin' the dream!! Girl, I am, once again, so stinkin' proud of you. You amaze me and I often have to pinch myself to believe that I am actually friends with you ;) So excited to see how this year continues for you. May all of your hopes for this research come true and may you truly LEARN even more than you were striving for this year. I love ya!