I had planned to spend this week tootling around Rabat with my dad. However, thanks to a certain Icelandic natural disaster, the poor guy is stuck in Berlin…hopefully having plenty of beer tastings in the airport with his fellow marooned .

So, instead of Fun Times with Pop, I’ve been preparing for the upcoming Fulbright Symposium (yikes!), planning for travels to Lebanon, Syria, and Jordan, spending time at the beach, and of course, cooking. I even ventured out to find a public oven in my neighborhood.

Most Moroccan homes are not equipped with ovens. Instead, women prepare the daily bread the night before, let it rise at night, then take it to the local wood-burning oven in the morning. There is usually a man standing in the pit, receiving baked goods, and using his expert knowledge of fire to decide where in the oven he should place your loaf in order to bake it at the correct temperature. Obviously it’s not very precise, but for about 3 dirham (30 cents), I can walk around the corner with my loaf, and have piping hot what-have-you 30 minutes later. Best of all, the Oven Man is a riot. I think he and I are going to be gooood friends.

In the spirit of public ovens, and summertime, I will post two summery recipes. Not necessarily Moroccan. Super simple, almost “duh!”-worthy, but dear to me for two reasons:

1. The people from which they came

2. The Spirit in which they are made.

They’re like…heirloom recipes! To be written in the beat-up blue watermelon family cookbook that my mom has been keeping for years.

My good friend Mustapha’s family has basically adopted me. I have meals over at their house, cook, dance and sing Berber songs with his mom, Zohra. (One of Morocco’s finest chefs, btw). She only speaks Darjia and Berber, so sometimes the recipes are hard to catch if I’m not watching carefully. Zohra takes advantage of the fruits and veggies of the season and makes her own jam (confiture). The other day I was sitting around while Zohra was making strawberry jam. She taught me how, then explained that I should try at my own house using cumquats, which are in season here in Morocco, and are ridiculously cheap (read: men with big wooden carts walk around neighborhoods and shout “Cumquats! Cumquats!” Like some kind of fruity parade.) So, I bought a kilo and cooked up this confiture myself. For some reason, I think only grandmothers can make jam properly (there’s some kind of aura they add, I’m sure)…but here it is, so simple that it can be adapted to almost any fruit. Fresh, no preservatives, so you don’t want to keep it long. 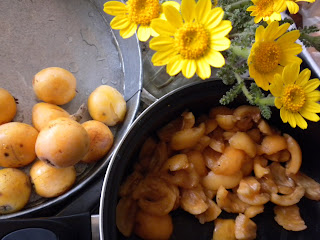 1. Wash and cut up 1 kilo of any “soft” fruit (berries, cumquats, peaches..). I ended up peeling the cumquats, because it was easy enough, and kept the jam soft.

2. Plop in a big soup kettle and turn on low heat. Don’t add any water, it will boil out of the fruit.

3. Boil for about half an hour to 45 mins, until greatly reduced and mushy.

4. Add 1 cup of any sweetener you like. Or less. Moroccans use SO MUCH sugar in their foods, and I try to stay away from it. I added about ½ cup honey and it turned out deliciously tart and sweet. I’d like to see what it would be like with Agave Nectar. 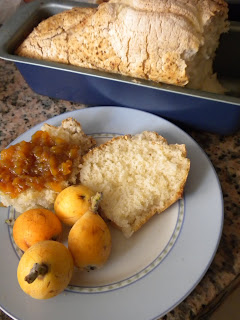 5. Squeeze 1 small orange into the mix, plus a pinch of salt. (I also added a pinch of cinnamon to my cumquats)

6. Simmer gently for another ½ hr, stirring often to keep from burning.

7. Let cool…or eat it warm on gluten-free bread, fresh out of the community oven!

8. Now, you can can this mixture (haha, “can can”. Sorry.), if you’re feeling ambitious…but I suggest just putting it in an airtight jar and eating it on everything. Before I had bread, I scooped it up on walnut halves with a little blue cheese. Pretty little Decadence indeed.

**To be eaten while watching the morning surfers catch the first waves of high tide.While listening to Brooke Fraser's "C.S. Lewis Song"

This recipe is adapted from Heidi Swanson’s Carrot Dill White Bean Salad. I attempted to make it for an impromptu lunch party with friends Cherry and Jesse (“I know that’s right!”), but all I had on hand were garbanzo beans. I’ve made it both ways, and people tell me they prefer the garbanzos. You be the judge.

I love this salad because it’s so colorful, and all the flavors just explode into this symphony that remind me of the waves crashing outside my window. I mean, honey + lemons + dill + caramelized almonds? It works.

Oh yes, I’ve named it after dear Cherry, because she liked it enough to ask that I post it on my blog. Shoutout. 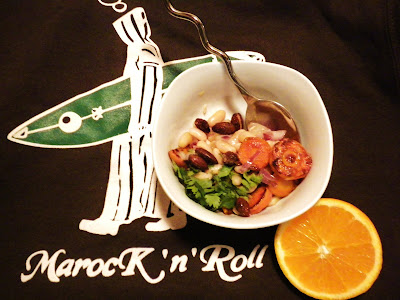 1. Combine the olive oil, lemon juice, salt and shallots in a small bowl. Stir and set aside.

2. Toss the carrots with a splash of olive oil over medium heat. Let them cook in a single layer - they'll give off a bit of water at first. Keep cooking, tossing gently every three or four minutes until the carrots are deeply browned.

3. Add the beans and dill to the skillet and cook for another five minutes, or until the beans as well heated through. If you need to add a bit more olive oil to the pan - do so.

4. Place the contents of the skillet in a large mixing bowl, sprinkle with the brown sugar/honey and pour the 3/4 of the lemon-olive oil mixture over the top. Toss gently.

5. Let sit for ten minutes. Toss gently once again, taste and adjust with more salt or sugar or lemon juice if needed to balance the flavors.

6. Serve warm or at room temperature and finish by sprinkling with the almonds just before serving. I sometimes caramelize the almonds by heating them up with a tablespoon of butter and a sprinkle of sugar. Just adds another “Wha-BAM!” to all the flavors of this dish.

** to be eaten watching the last surfers of the day dragging in their boards to the beach and arguing with fishermen about whose territory is whose. Hilarious.While listening to Ben Harper's "Waiting on an Angel" and "Diamonds on the Inside".